Prior to the 2007 season, the Steelers introduced Steely McBeam as their official mascot. As part of the 75th anniversary celebrations of the team, his name was selected from a pool of 70,000 suggestions submitted by fans of the team. Diane Roles of Middlesex Township, Butler County, Pennsylvania submitted the winning name which was "meant to represent steel for Pittsburgh's industrial heritage, "Mc" for the Rooney family's Irish roots, and Beam for the steel beams produced in Pittsburgh, as well as for Jim Beam, her husband's favorite alcoholic beverage." Steely McBeam is visible at all home games and participates in the team's charitable programs and other club-sponsored events. Steely's autograph is known to be drawn with an oversized 'S' and the "L" is drawn to look like a beam of steel. 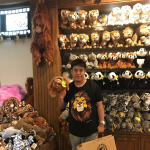